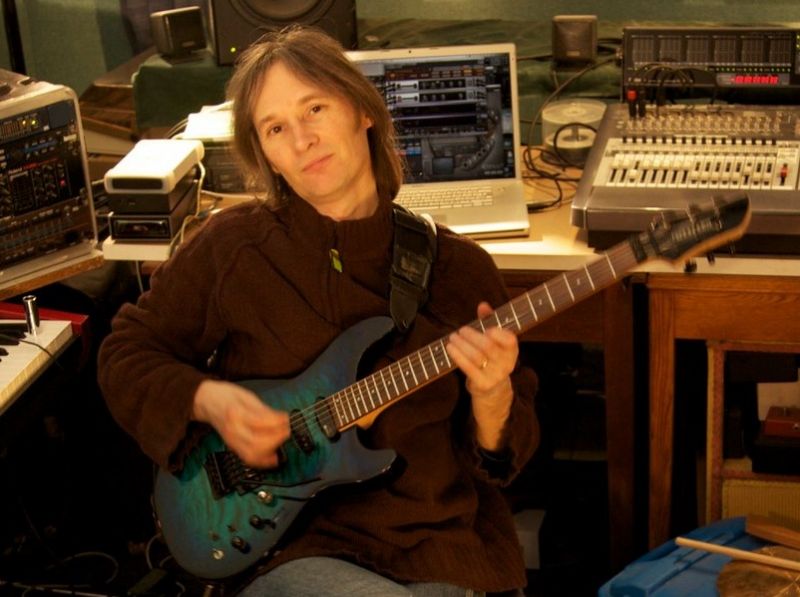 Recently I have been recording at Open Sky studios with my friend and IONA co-founder Dave Bainbridge for a new project by Barry & Batya Segal (Israel) - more on this new project later.

Dave, myself and the rest of the Moriah band will be with Barry & Batya in London during October for the `UK Feast Of Tabernacles` event at the Emmanuel Centre. For more information on the music & work of Barry & Batya please visit: http://www.visionforisrael.com.

Dave & I have a long history going back to the mid-1980`s (recording & touring with Adrian Snell - mainly for his `Alpha + Omega` & `Song Of An Exile` projects).  Also, I would encourage you to discover more of the music & work of my good friend Adrian: http://www.adrian-snell.com/

Most recently Dave & I have re-united for a beautiful new project entitled `Life Journey`. This recording is inspired by the book, writings & artwork of Mary Fleeson. Each piece on this CD has its own identity, presence & atmosphere - a sound reflection of each specific theme & work of art that we have sought to express or interpret from Mary`s uniquely beautiful artwork. For more on this project do please visit: http://www.life-journey-cd.com 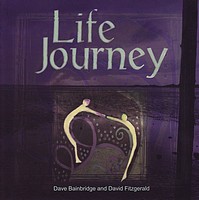 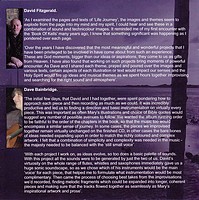 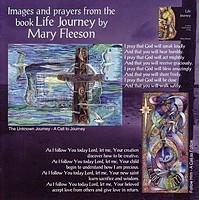 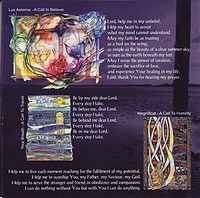 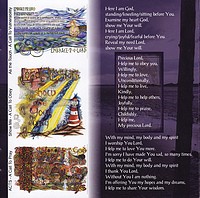 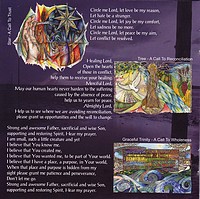 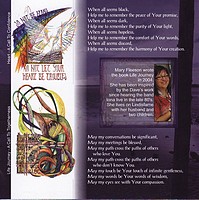 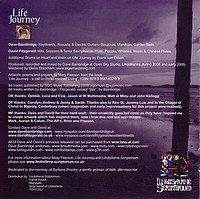 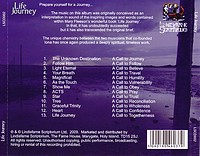 Mary Fleeson lives with her husband Mark and children Aurian & Calum on the Holy Island of Lindisfarne. This has been a very special project for Dave & myself. We think that you will like this (particularly if you like the early Iona recordings, such as `The Book Of Kells`). It has now been released. For more on this project do visit:

The Eye of the Eagle 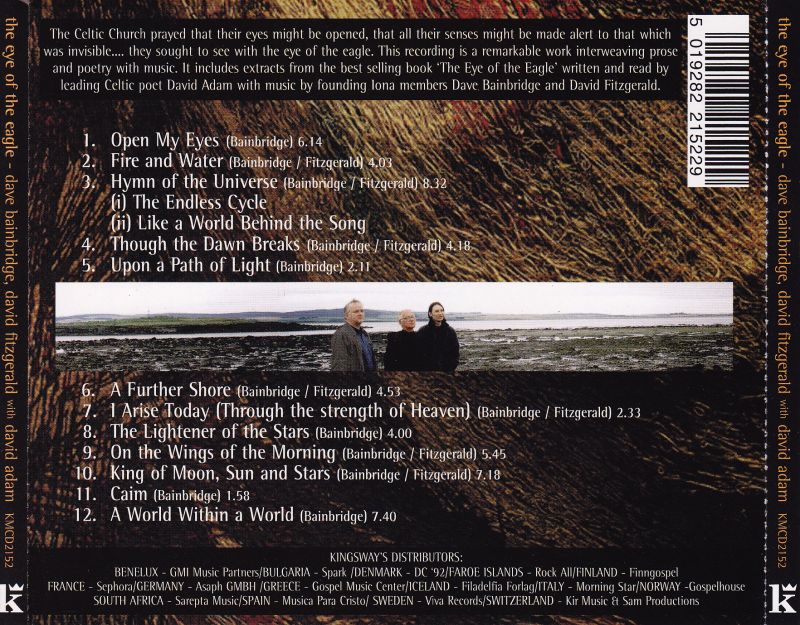 The origins of this project go back to 1995. I was filming on the Holy Island of Lindisfarne for a BBCTV series (7 in total) entitled `First Light`, which was an excellent series of programmes under the masterful direction of film & tv producer Graham Judd. During one of the breaks I walked and spoke with writer & author David Adam (then Canon to the Church of St Mary on Holy Island).

Following the project that I had recorded with IONA - entitled `The Book Of Kells` - I shared with him that it had been on my mind (heart & spirit) to follow one or two other `seeds` of ideas for projects. I explained that one of these was to be founded upon his writings. Over the years, along with many thousands of people around the world, I have come to greatly appreciate his words and his profound insight. I shall never forget early morning prayers in the Church on Holy Island (in all kinds of weathers) led by David. At the heart of the project idea was a desire to not only capture his words but also his voice. 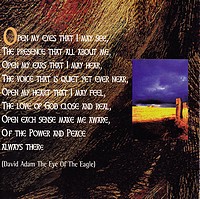 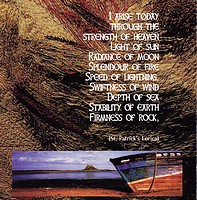 During my conversation with David I asked him "if we were to try and assemble a musical project around one of your books which would be the one that you would choose for us to interpret?". Without much hesitation he replied (in his wonderful Northumbrian accent) "It would have to be The Eye Of The Eagle". "Why is that?", I replied. David looked into my eyes and said "because the Eagle beyond all of God`s creatures can fly higher, see further than any other. The Eagle can fly into the Sun and not be dazzled`" Immediately I was transported to another world; what a metaphor for something Eternal, beyond the physical. With David`s consent I set to work, exploring the possibility for such a project. Researching the book, along with others by David, I became more excited that this could be set to music, hopefully bringing something of that `other world` to the sounds that we might create. 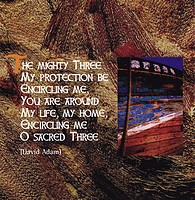 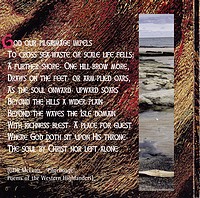 I shared these ideas and thoughts with Dave Bainbridge and he responded so positively that it became obvious that we should unite for this venture. I could write pages on this project. I have endless notes and diary pages regarding the assembly, recording and then performance of this work. It remains very special to me. The writing sessions with Dave were like old times. We prayerfully read a chapter or a section of the book, then selected texts that seemed to leap out of the page and these became our themes. We recorded the narrated passages on Holy Island (in the Old Library) with David Adam reading these beautifully & skilfully (he is a natural orator). Recording with Calum Malcolm (legendary producer of bands such as The Blue Nile) at Fish`s `Millenium Studio` in Scotland and then mixing at Calum`s `Castle Sound` studio (just down the road) remain special memories. There has been only one live performance of `The Eye Of The Eagle`, thanks to an invitation given by Norwich Festival & Anglia TV. This is now available on DVD and hopefully will become available on CD once again (I am hopeful that we shall see a 2CD release that will offer narrated and instrumental only options).

Here is a short extract of the live performance:

Please go to http://www.youtube.com/watch?v=vc2AvFZOIsg for more details of the DVD.

For details on the writing & work of David Adam & to purchase these: http://www.lindisfarne.org.uk/bookshop/stocklist1.htm For CrossRhythms Review: www.crossrhythms.co.uk/products/Dave_Bainbridge/The_Eye_Of_The_Eagle_The_World__Premier/18505

"The Eye of the Eagle` takes us on a journey through the medium of creative and powerful use of word and music which produces a landscape of images in the mind of the listener. These landscapes speak to us of the mystery of creation, from the vastness of this world and of the universe beyond, to the intimacy of human relationship and spiritual experience.

Based upon the book of the same name, `The Eye of the Eagle` is a musical interpretation of the writings of the highly acclaimed writer and poet David Adam, who also narrates his own work on the original CD recording (his voice being recorded on location on the Island of Lindisfarne, along with the sounds of the island: the sounds of the sea, the wind and the sea birds. 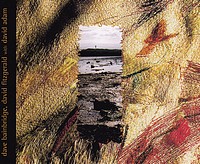 `The Eye of the Eagle` draws upon select Biblical sources as well as the work of writers such as William Blake and TS Elliot. In addition to this are other texts by ancient Celtic Saints such as St Patrick and modern Eastern Orthodox writer Bishop Kallistos Ware. The emphasis is upon the music however, which is a faithful interpretation of the chosen texts, and is a most wonderful and rich tapestry of sounds and styles." (http://www.iona.uk.com/albums/detail/id/24/eye-of-the-eagle-full-version)