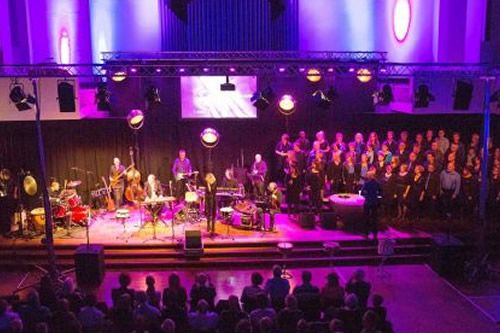 In October 2016 I returned to Holland for a short tour with Adrian Snell. The purpose of the tour was to record a live presentation of Alpha & Omega which was originally recorded in 1986! Back then I was invited to record Saxophone & Flute solos and embellishments for this significant new work. What followed were many tours and concerts all over Europe and in Israel, the last being in Switzerland in 2007. As you can imagine meeting up with Adrian & Dave Bainbridge again was truly special and as we commenced rehearsals (with musicians, singers and a large choir from Holland) it was clear to us all that this work remains as powerful and as moving as ever it was - in fact, in the light of what is unfolding across this troubled world today, even more so.

The recordinghave been mixed, edited & mastered (by Dave Bainbridge & Nigel Palmer) and so the 30th Anniversary live edition of Alpha & Omega has been be released on CD and is available through various the usual streaming outlets (Apple Music & Spotify). There are hopes that `Alpha + Omega` will tour once again throughout Europe & here in the UK.